The information and photos were gathered from: 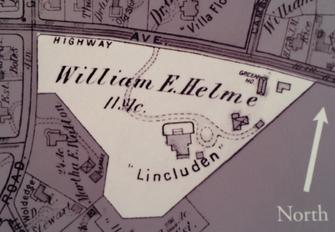 A hundred years ago, a single residential building dominated the 11 acres that encompass St. David's Park Condominium today.   The estate was called "Lincluden.” The photograph can been seen on-line at www.brynmawr.edu/iconog/king/k97b.jpg.   It is part of a collection of photographs of Philadelphia estates.  The following text accompanies the picture via another link:

"In the pretty suburb of St. David's, named from the quaint and secluded "Old St. David's Church at Radnor," about 150 yards south from Lancaster Pike, built of gray stone, on the crest of a hill, is the handsome home of William E. Helme, of Helme & McIlhenny, the Philadelphia manufacturers of gas meters.   The grounds comprise 11 acres and adjoin the St. David's golf links.   Horace Trumbauer, architect.”

Carol Creutzberg, for many years a prominent writer on local Radnor history, provided a deeper background on this property back in June, 1999, as follows: In 1683, the Morgan family owned a large property in this area. They were farmers. "James Morgan was from Radnor-shire in Wales, and the name of the farm where his home had been was 'Vanor.'   That name continued for around 275 years.   The Chew estate was called Vanor." "During the Revolution, Morgan's grandson, Mordecai, was one of the few Quakers who joined the army.   For this, he was read out of the Meeting.” During the 1800s, there were no male heirs, so the names changed from Morgan.  Johnson- Brown, of New Jersey, married a Morgan daughter. They had 500 acres.  On Radnor- Chester Road, one can still see the high wall that was the back of their greenhouse. They had two daughters: Martha (of Martha Brown's Woods); and another daughter, who married Benjamin Chew.  Some of the Chew property was later sold, and became a golf course (adjacent to the Saint Davids Park condo property, just to the east).

St. Davids Park is a unique property situated on Philadelphia's Mainline and is home to a variety of owners, renters, students, professionals and retirees. The community consists of 152 one and two bedroom garden style apartment homes, an open space area for pets and activities, and an underground garage. Situated in Saint Davids, PA, our community is within walking distance of both downtown Wayne and Septa's R5 line.